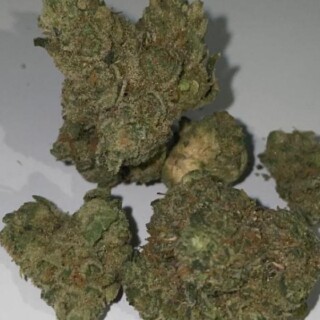 19.8% THC
Indica Hybrid (60% Indica / 40% Sativa)
Brand:
Terpenes:
Get yours today! Order Online!
Z Crasher is a cross between Zkittlez and Wedding Crasher.Although slightly Indica-dominant, the bright colors might make you think it is more of a Sativa. The dense, round buds have curly, lime-green leaves, packed tightly together, and interspersed with fiery-orange pistils. Garland-like braids of amber-trichome hairs wrap around the buds, cementing them together, contributing to their fuzzy appearance. Z Crasher has a sweet, yet musky grape odor, with hints of citrus and pepper. The sour-grape and citrus flavor is reminiscent of its Zkittlez parent, with a spicy-pepper aftertaste. The Z Crasher name can be misleading, as it is not the strain for crashing or catching Z's. Users have reported a smooth surge of creative cerebral energy, and an easing of stress. One older user described a trippy feeling of elation, while physically being able to move lighter and easier. Users with chronic pain, looking for a soothing Indica, that won't leave them lethargic might look to give Z Crasher a try, some reviewers suggest. Z Crasher is a versatile hybrid, with solid reviews for body effects, while still packing a decent psychoactive punch.